Faeries have always interfere in the life of mortals and it is probably their reason of being among us. A lot of “evil” fairies have been held responsible for the bad weather and the resulting poor crops, diseases, disparitions and all the things that men could not explain.

Less harmful are the “tricks”, the special jokes that they enjoy making us, such as tangling the hair of sleepers into “Elf-locks”, stealing small items or leading a traveler astray.  As many traditional fairy-tales show, the Fairies preferably harass those who deserve it. They rob the purse of the niggards, punish the wife-beating husband and give headache to the lazy worker. Lack of generosity, rudeness and selfishness are all unpopular with fairies.

As a secret people, they tend to punish any attempts at spying or infringements of fairy privacy, often to the utmost of their power. People who spied on the fairy revels or boasted of fairy favours were generally punished, sometimes with blights and illnesses, and those who stole fairy treasures did so in danger of their lives. In short, the faults chiefly condemned by them are undue curiosity, meanness, sluttishness, illtemper and bad manners.

Fairies have been used to borrowing from their human neighbours since a long time ago. This is particularly frequent in Scotland where they have a strong reputation for taking things without the knowledge or consent of the owners. They borrow grain and occasionally implements. They borrow the use of mills and of human fires. They borrow milk and butter and even whiskey.

In the friendly intercourse of fairy borrowing, they sometimes beg for a suck of milk from a human breast for a fairy baby, or a loan of human skill to mend a broken tool such as a broken ped. They even had to hire human warriors to protect them against the hords of monsters.

Some argue that the first fairies were the remnants of a conquered people gone into hiding and yet creeping nervously around their conquerors for what pickings they could find. In some of the stories, such as the medieval tale of Malekin, the explanation might be that it was a human changeling who wished to return to the world again and so refrained from fairy food, but the instance are too frequent to allow of that as the sole explanation.

On the other hand, Fairies have kindly lent to man many time in the history. When a loan is returned to them, they accept only the fair equivalent of what they have lent, neither less nor more. If more is offered they take offence, and never give an opportunity for the same insult again.

In their strange fashion of stealing, there are some strong differences with the behavior of the dishonest people.

The Fairies do not take their booty away bodily; they only take what is called in Gaelic its toradh, i.e. its substance, virtue, fruit, or benefit. The outward appearance is left, but the reality is gone. Thus, when a cow is elf-taken, it appears to its owner only as suddenly smitten by some strange disease. In reality the cow is gone, and only its semblance remains, a simulacrum that yield no edible milk. Similarly when the toradh of land is taken, there remains the appearance of a crop, but a crop without benefit to man or beast, the ears are unfilled, the grain is without weight, the fodder without nourishment.

A still more important point of difference is, that the Fairies only take away what men deserve to lose. When mortals make a secret or grumble over what they have, the Fairies get the benefit, and the owner become a poor man, in the midst of his wealth. Particularly articles of food, the possession of which men denied with oaths became Fairy property.

A common feature of the fairies is the use of magic to disguise appearance. Fairy gold is notoriously unreliable, appearing as gold when paid, but soon thereafter revealing itself to be leaves, gorse blossoms, gingerbread cakes, or a variety of other useless things.

Most frequently it was women and their babes that the Fairies abducted. On every occasion of a birth, therefore, the utmost anxiety prevailed to guard the mother and child from their attacks. It is said that the Fairy women are unable to suckle their own children, and hence their desire to secure a human wet-nurse. “Howdies”, as they are called, taken in the way of their profession to the Fairy dwelling, found on coming out that the time they had stayed was incredibly longer or shorter than they imagined, and none of them was ever the better ultimately of her adventure.

The first care was not to leave a woman alone during her confinement. A house full of women gathered and watched for three days, in some places for eight. Various additional precautions against the Fairies were taken in various localities. A row of iron nails were driven into the front board of the bed; the smoothing iron or reaping hook was placed under it and in the window; an old shoe was put in the fire; the door posts were sprinkled with urine, a liquid extremely offensive to the Fairies.

The presence of the Bible and the recitation of many prayers were considered a form of exorcism similar to vampires, werewolves and demons. The name of the Deity solemnly pronounced over the child in baptism was an additional protection.

When fairies stole away a baby, they usually either left a changeling in its place, or else a stock of wood, roughly shaped as a child and enchanted with faerie glamour so that it appeared as the stolen child, at least temporarily. Often this wood was Alder, a tree associated with wickedness.

This practice of a stock was almost always the case when adult women were taken away. Those without the second sight would see and be convinced that the enchanted stock was the either dead or unconscious body of the stolen one. It is believed that the Reverend Robert Kirk was taken to away to faery land and it was only a stock of wood that was buried in his grave. Kirk himself referred to this effect as “a lingering substituted image” in his famous work, Secret Commonwealth.

If identified as a changeling, the baby could be neglected, abused, and even put to death with no moral compunctions. It was then easier for the unfortunate families to get rid of the abnormal child that represents a burden in those hard times.

To get rid of him, one had to resort to the most extreme means. The return of the original child “may be effected by making the changeling laugh or by torturing it; this latter belief was responsible for numerous cases of actual child abuse”.

Many of the deformities in children are attributed to the Fairies. When a child is incautiously left alone by its mother, for however a short time, the Fairies may come and give its little legs such a twist as will leave it hopelessly lame ever after. To give them their due, however, they sometimes took care of children whom they found forgotten, and even of grow up people sleeping incautiously in dangerous places.

The Fairy arrow known also as Fairy flint, elf-bolts, thunderbolt or thunder-arrow consists of a triangular piece of flint, bearing the appearance of an arrow head. It probably originally formed part of the rude armoury of the savages of the stone period. Popular imagination, struck by its curious form, and ignorant of tis origin, ascribed it to the Fairies.

Another belief is that a thunderbolt is created when lightning strikes the earth. It was said to be frequently shot at the hunter, to whom the Elves have a special aversion, because he kills the hinds, on the milk of which they live. They could not throw it themselves, but compelled some mortal who was being carried about in their company to throw it for them. If the person aimed at was a friend, the thrower managed to miss his aim, and the Fairy arrow proved innocuous. It was found lying beside the object of Fairy wrath, and was kept as a valuable preservation in future against similar dangers, and for rubbing to wounds The man or beast struck by it became paralyzed, and to all appearance died shortly after. In reality they were taken away by the elves, and only their appearance remained. Its point being blunt was an indication that it had done harm.

Any form of sudden death might stem from a fairy kidnapping, with the apparent corpse being a wooden stand-in with the appearance of the kidnapped person. Consumption (tuberculosis) was sometimes blamed on the fairies, forcing young men and women to dance at revels every night, causing them to waste away from lack of rest. Fairies riding domestic animals, such as cows or pigs or ducks, could cause paralysis or mysterious illnesses. 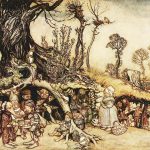 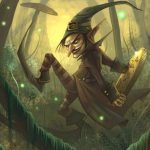 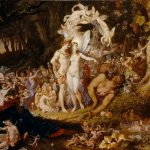 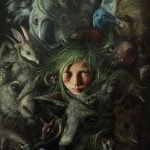