Frankenstein has enjoyed an afterlife in numerous stage productions and movie adaptations that have reshaped the monster of the original story. Indeed the monster has taken the name of his creator and his archetypal image is still influenced by the 1931 movie poster and movie starring Boris Karloff as a green skinned giant with bolts in his neck.

The creature in Shelley’s 1818 novel is hardly the grunting, green-skinned behemoth familiar to generations of movie fans. Stitched together from body parts and brought back to life by Swiss scientist Victor Frankenstein, he develops into an articulate, sensitive being who ponders the meaning of life while suffering his miserable existence abandoned and alone.

At the moment he animates his patchwork of flesh he recoils in horror. “How can I describe my emotions at this catastrophe, or how delineate the wretch whom with such infinite pains and care I had endeavoured to form? His limbs were in proportion, and I had selected his features as beautiful. Beautiful!-Great God! His yellow skin scarcely covered the work of muscles and arteries beneath: his hair was of a lustrous black, and flowing; his teeth of a pearly whiteness; but these luxuriences only formed a more horrid contrast with his watery eyes, that seemed almost of the same colour as the dun white sockets in which they were set, his shrivelled complexion and straight black lips” (57).

I saw the dull yellow eye of the creature open; it breathed hard, and a convulsive motion agitated its limbs.

His limbs were in proportion, and I had selected his features as beautiful. Beautiful! — Great God! His yellow skin scarcely covered the work of muscles and arteries beneath; his hair was of a lustrous black, and flowing; his teeth of a pearly whiteness; but these luxuriances only formed a more horrid contrast with his watery eyes that seemed almost of the same colour as the dun-white sockets in which they were set, his shrivelled complexion, and straight black lips.

I beheld the wretch — the miserable monster whom I had created. He held up the curtain of the bed; and his eyes, if eyes they may be called, were fixed on me. His jaws opened, and he muttered some inarticulate sounds, while a grin wrinkled his cheeks. He might have spoken, but I did not hear; one hand was stretched out, seemingly to detain me, but I escaped and rushed downstairs.

He approached; his countenance bespoke bitter anguish, combined with disdain and malignity, while its unearthly ugliness rendered it almost too horrible for human eyes.

A fiendish rage animated him as he said this; his face was wrinkled into contortions too horrible for human eyes to behold; but presently he calmed himself and proceeded.

A ghastly grin wrinkled his lips as he gazed on me, where I sat fulfilling the task which he had allotted to me.

As I looked on him, his countenance expressed the utmost extent of malice and treachery. I thought with a sensation of madness on my promise of creating another like him, and trembling with passion, tore to pieces the thing on which I was engaged. The wretch saw me destroy the creature on whose future existence he depended for his happiness, and, with a howl of devilish despair and revenge, withdrew.

The shutters had been thrown back; and, with a sensation of horror not to be described, I saw at the open window a figure most hideous and abhorred. A grin was on the face of the monster; he seemed to jeer, as with his fiendish finger he pointed towards the corpse of my wife.

I entered the cabin where lay the remains of my ill-fated and admirable friend. Over him hung a form which I cannot find words to describe: gigantic in stature, yet uncouth and distorted in its proportions. As he hung over the coffin, his face was concealed by long locks of ragged hair; but one vast hand was extended, in colour and apparent texture like that of a mummy. when he heard the sound of my approach, he ceased to utter exclamations of grief and horror, and sprung towards the window. Never did I behold a vision so horrible as his face, of such loathsome, yet appalling hideousness. I shut my eyes, involuntarily, and endeavoured to recollect what were my duties with regard to this destroyer. I called on him to stay. 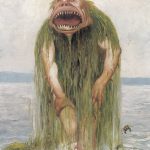