Behavior: the Lobisón wanders in the hills and mountains, feeding mostly upon carrion. However, if they get to meet with a human being, they will instantly attack.

Cause : usually the seventh son in a family (whereas the seventh daughter is doomed to be a witch). Victims will then turn into Lobisones themselves, but it is quite rare, because most people die in the claws and teeth of these ferocious creatures. It is also said that if a Lobison’s saliva sprinkles over a man or a woman, he or she will eventually turn into a Lobisón.

In the early 1900s the legend of the 7th son (it had to be 7 boys in a row, no girls in between) transforming himself into a werewolf was so widespread and believed that it was causing a lot of children to be abandoned or given away for adoption, and it is said that in some cases the parents killed their own son.

Because of this, the president passed a law in the 1920s by which the 7th son of a family automatically receives the godfathership of the president of Argentina. Through this, the state gives him a gold medal on the day of his baptism (when the president officially becomes his godfather) and a scholarship for all of his studies until his 21st birthday. Supposedly, this ended the phenomenon of people condemning their children for fear of the werewolf. The law is still in effect, and it is popularly known, and the presidents have always attended at least some of the baptisms, especially during election. 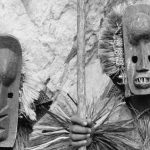